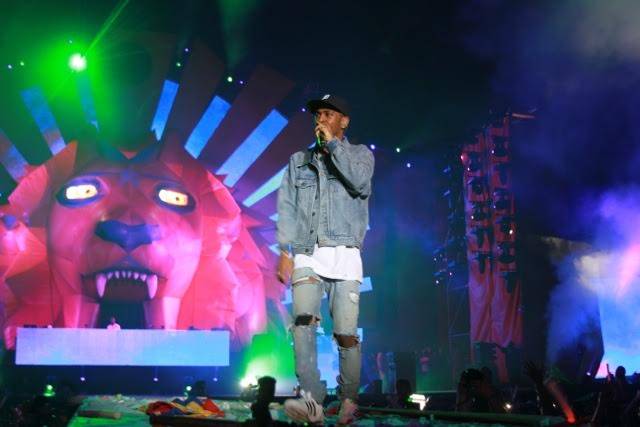 It’s a world renowned music festival and a mirage of world renowned EDM Dj’s, musical artists and celebrators covered in paint, who are ready for mayhem. Life in Color, the full day festival was held on January 16, 2016 at Miami’s Sun Life Stadium and was one of the hottest tickets to the start off the New Year. With performances by Jack U ( Skrillex & Diplo), Steve Aoki, Big Sean, Crespo, Morten, Bonnie x Clyde, Ruby Rose and David Solano, the day to night festival was home to 25, 000 fans, covered in paint, who all were swarming to stages otherwise known as the four kingdoms. The Rage Kingdom, Underwater Kingdom, Sphere Kingdom, and Spirit Kingdom were all architectural spectacles that included a huge lion head at the main stage and Mad Max style DJ pits, Ferris wheels and under water exhibitions which topped off this insane raver’s parade. Fluff Magazine got some one-on-one’s with some of the headlining acts of Life in Color, who gave us insight on their new projects, upcoming tours and overall experience on the road with this international music festival.

Zookeeper one of the newbies to L.I.C., he was stoked to be in the presence of other acts that he is a big fans of himself. Starting his musical career playing in NY rock and punk bands as a teen, he has made a gigantic evolution to his current status as a noteworthy DJ. Remaining humble and making the effort to explore Miami while in town, Zookeeper made sure to rock the stage and keep his energy high during his set, while showing support to his fellow musicians who also rocked out in the kingdoms.

Morten, the tattooed Dane who debuted his newest album “Beautiful Heartbeat” just one day before L.I.C. was right in a world wind of travel from one gig to the next. Heading in to Miami to bless the stage with his mind-blowing set, showing yet again how this veteran DJ and Producer has sustained 10 plus years in the industry and why he has a chart topping album out right now. Morten was alsoextremely supportive of fellow DJ’s and was most looking forward to seeing his great friend DJ Ruby Rose during her performance that evening, all while talking up his new single from Beautiful Heartbeat with Swedish singer Frida Sundemo which is also topping the I-Tune charts.  http://mortenofficial.com/

Bonnie x Clyde, the super duo and former high school classmates residing in Miami but originally from Virginia are making a huge name for themselves in the EDM world. They were also among the talents that gave us the deets about new music and a Florida state tour that they have in the works. When it came down to the obvious chemistry that these two have off stage, it’s clear to see how this female vocalist and Male DJ duo are one the verge of a musical domination. Super optimistic about where their career is heading, these two have some pretty exciting collaborations in the works that they were sworn to secrecy on, but the masses will get to experience very soon . https://soundcloud.com/bonnieandclydeofficial

For more info on Life in Color, their global domination and upcoming shows, please check out http://lifeincolor.com/.